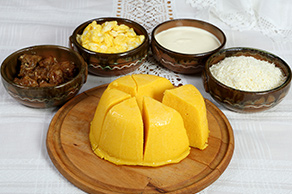 Traditional Moldovan cuisine is famous for its wide variety of different dishes and delicious taste. It has been heavily influenced by the cultures of the many peoples who lived in the territory during the past centuries: Ukrainians, Russians, Greeks, Jews, Germans and others. Moldova produces plentiful fruits, vegetables, grains, meat, and milk products, all of which have found their uses in the national cuisine. The fertile soil combined with the use of traditional agricultural methods permits growing a wide range of ecologically clean food.

Moldovan cuisine features many appetizers. Common appetizers include fresh vegetables, such as tomatoes, cucumbers, bell peppers, and green onion; brined sheep’s cheese (brinza); assorted cheeses; smoked fish; cured meats and salamis; mashed beans with garlic (fasole facaluite); grilled vegetables; stuffed pepper and eggplants; stuffed cabbage and grape leaves (sarmale); and a diverse array of salads made of fresh or pickled vegetables. Another frequent appetizer is placinta, a kind of bread or pastry, varying in shape and size depending upon the region of the country where it is produced, usually filled with cheese, cabbage, mushrooms, or potatoes.

Soups are also very popular in Moldova cuisine. Some say a meal is not complete without soup. Two of the most common soups are zama, a kind of chicken noodle soup, and ciorba, served with meat or beans. Both zama and ciorba tend to be slightly sour. There are also many other soups, such as borsh and solyanka.

Meat and fish features prominently in Moldovan cuisine. Mutton is used to cook mangea and moussaka and beef for paprikas and mititei (grilled ground beef rolls). Pork is the main component of mancarica (stew) and tocana (stewed pork), costita (pork chop), and carnatei (sausages). Poultry is used in iahnie (a sort of ragout) and zeama. Carp, trout, and pike perch are common fish served in Moldova. Many traditional meat and fish dishes are grilled over natural charcoal. Meat and fish are often marinated before grilling.

Perhaps the best known Moldovan dish is mamaliga or polenta (a cornmeal mush or porridge). This is a staple food on the Moldovan table, served as an accompaniment to stews and meat dishes and frequently garnished with brinza, sour cream, and sometimes fried or scrambled eggs. Pork tocana (stew) and mamaliga is a local favorite, often served in restaurants throughout the country.

Most Moldovan meals end with an assortment of fresh fruits: apples, pears, peaches, apricots, cherries, and grapes. Another delicious, and uniquely Moldovan, dessert is dried prunes stuffed with walnuts, served in a sweet, smoky molasses-like syrup. There are also dessert placinta, stuffed with sweet cheese, apples, cherries, pumpkin, or halva.

In certain regions the cuisine of various minorities is predominant. In the East, Ukrainians eat borsh. In the South, Bulgarians serve traditional mangea (sauce with chicken), while the Gagauz prepare shorpa, a highly seasoned mutton soup. In Russian communities, pelmeni – meat-filled dumplings – are popular. Also popular are a variant of Ukrainian varenyky, a dumpling, called coltunasi filled with fresh cheese, meat, or cherries.

During Easter holidays special dishes are prepared for the occasion. Pasca is traditional Easter bread, central to the holiday, made from leavened dough and filled with cheese. The loaves often resemble braided wreaths and are ornately decorated, commonly with images of the cross. Cozonac is traditional sweet bread made with milk, sugar, eggs, butter and raisins. It is similar to the Italian Pannettone. Traditional savory Easter dishes include unsalted cheese, spring greens, various meat preparations of lamb, pork, or poultry, racitura (meat jelly), cabbage, and painted Easter eggs, which according to tradition, people bump together to see whose egg is strongest.

By tradition, Moldovans serve pork at Christmas. Pork tocana and mamaliga is a common dish. It is also common to make and serve homemade sausages, ham, saltison (pork stomach stuffed with chopped meat), pork-foot racitura (jelly), and many other delicacies depending on the local tradition. Meals are accompanied by red sparkling wine or izvar, mulled red wine with sugar or honey, black pepper, and cinnamon.

At Christmas time, Moldova’s culinary traditions feature alongside cultural tradition. Carolers sing and play music and perform traditional holiday shows: Malanca, Ursul (the Bear), Calul (the Horse), or Capra (the Goat). While these traditions are stronger and more evident in rural areas, even in Chisinau you can find groups of folk artists on the street.