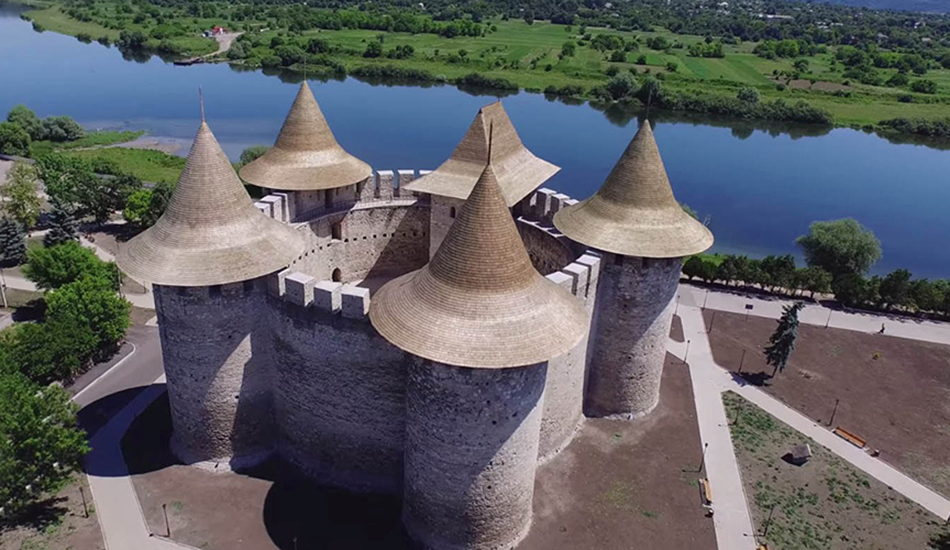 Just in one Day

Throughout excursion we will find the history of the ancient cities located on the territory of Moldavia, we will hear the history of the Soroca fortress, part of the defensive system of the Moldovan State. At the “Candle of Gratitude” we will say a word of thanks to our forefathers, who have spent centuries doing so to leave invaluable material and spiritual values;

On the hill of Soroca we will admire the palaces of the Roma in Moldova; at Cosauti we will deepen into the Paleolithic to find out the way of life of the ancient ancestors who have lived in the resort here, we will worship at the Cosauts monastery, located on the bank of the Nistru in a picturesque setting, we will drink water from the spring with the water of health; Did you know that? The construction of the Soroca Fortress is also called a “shell” type. In this style, there are the Del Monte Castle in Italy, Restormel castles and Queenborough in England.

Soroca is a town in the north part of Moldova, located on the Nistru bank. It is well known by the most original defensive building of Moldova – Soroca Fortress. Another monument worth to be visited during the excursion is “The Candle of Gratitude”. You will also visit “the Gipsy Hill”, unofficial gipsy capital

Not many countries nowadays can brag about having a unique fortress on its territory. However, Moldova is one of the countries that can. World’s most known symbol of Moldova is a legendary stork with a bunch of grapes in its beak. Did you know that it has nothing to do with the Moldavian wine? Well, that is true. This stork is related to the protection symbol of Moldova – Soroca Fortress that is located on the north of the country. During the turbulent times, people that were stuck inside the fortress during the rivals’ attacks could survive only thanks to the storks that brought them grapes. Soroca Fortress is the only stronghold left from the period of the Moldavian principality.

A unique fortress of Eastern Europe

Soroca Fortress is a unique historical monument of defensive constructions architecture of medieval Moldova. The prince Petru Rares, in his letter sent on 23 April 1543 to the magistrate of Bistrita town in Transylvania, asked for masters and hodmen to raise reinforcements in

Soroca Fortress is the only fortress built in the 15th century in Moldova, which has been preserved til now. Soroca Fortress is a unique historical monument of defensive constructions architecture of medieval Moldova. The prince Petru Rares, in his letter sent on 23 April 1543 to the magistrate of Bistrita town in Transylvania, asked for masters and hodmen to raise reinforcements in Soroca.

It is considered the decisive argument related to the stone fortress, a fortress of wood and earth existed here, believed to be built in 1499 by Stefan the Great. “Coste, chief magistrate of Soroca”, so is stated in the minutes of the Lord’s counsel of 12 July 1499. The first documented reference of Soroca, as a fortress of wood and earth, appears in the minutes. After two months, on 14 September 1499, “Coste, guildmaster of Soroca”, eyewitnesses the Treaty betwen Stefan the Great and Alexander, Grand Duke of Lithuania. Coste’s participation in the Lord’s counsel shows that Soroca fortress played an important role in defending the Throne Fortress of Stefan the Great from Suceava. Vestiges of this wooden fortification were found during archaeological excavations inside the fortress during 1958-1959 and 1968-1969.

The size and shape of Soroca fortress are very important for understanding its origin and place in the defense system of medieval Moldova. Soroca fortress is notable by its architectural system of fortification: the walls with 5 towers form a circular enclosure, making it able to withstand heavy artillery siege attacks. Soroca fortress is contemporary to the achievements of the Italian Renaissance; it carries features similar to many fortresses of Northern Italy (Caprarola Castle and Castel Del Monte). There are plenty of elements that make Soroca fortress resemble Queenborough, Walmer, and Deal castles from Kent, England.

The considerable changes of the fortress have occurred during the Polish people stay in the Fortress during 1684-1699. To the Enclosure walls, there were joined 13 rooms for storing gunpowder, and above them, rooms for accommodation were built. Also, around the fortress there was dug a deep ditch, filled with water from the Racovat rivulet.

Soroca fortress in its historical past was the arena of the fiercest invasions. Here, at the foot of its walls, the cruelest wars took place. For decades this architectural masterpiece of the Republic of Moldova, annually attracts thousands of tourists by its mystery.

The Cosauti monks monastery is located to the north of Soroca. As it is said, “in a deep gorge, there is an ancient medieval monastery, which has been recently restored by a few skilled craftsmen. Next to the monastery, there is a fountain with mineral water, the Brinks of the Nistru river and the granite quarry of Moldova”.

Distance from Chişinău: 170 km Location: Cosăuţi village, Soroca district Church of the “Assumption” monastery Founded in: 1994 Abbot: the archimandrite Ieronim (Palii) The monastery was founded in 1729 as a hermitage on the estate of the Husi Diocese. Later, in 1810, it receives the monastery status. After nine years of existence, the monastery was closed. The monks monastery was reopened in a new place on 22nd of April 1994, dedicated to the Mother of God (Acoperământul Maicii Domnului). In 1998 the official reopening of the Cosăuţi  monastery was blessed, the Archimandrite Ieronim (Palii) being then appointed to the chair of the abbey. The Chalk Cave Monastery creates a particular interest to the researchers, this being an individual cell on the right bank of the Nistru river. By analogy, we establish some similarities concerning the raw material (chalk rock), the working techniques (stone cutting) and interior fittings with the Bichir’s cave, from the entrance to the town of Soroca. This hermitage cave is carved into a cliff at a height of 170 m, with a northwest orientation. The terrace in front of the cell (that is of about 5 x 3 m) and the access to the cell are critically injured. Currently, many faithful people, travelers and tourists who are willing to find peace and spirituality, come to the Cosăuţi monastery.

Calculation is start from 1  person excurtion which are in group

Calculation is start from 1  person excursion which are in group