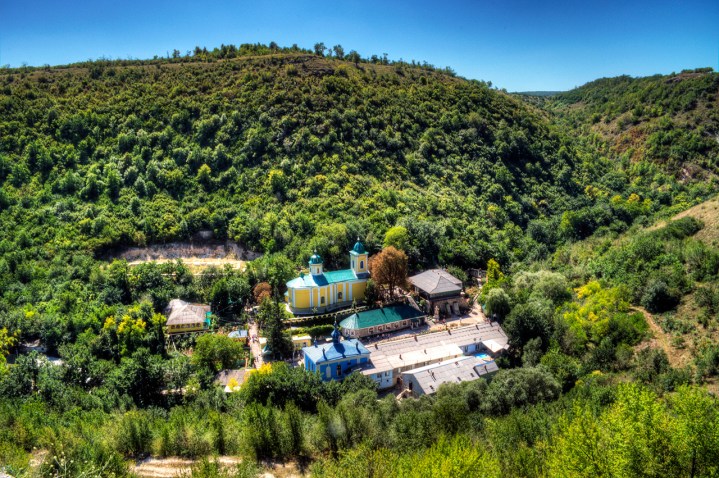 The “Holy Trinity” Monastery of Saharna, situated about 110 km north of Chisinau on the right side of the Nistru, is considered to be one of the biggest centres for religious pilgrimages in Moldova. Here can be found the unique relicts of St. Cuvios Macarie, and on the top of the high cliff, according to a legend, there is a footprint of St. Maria. The legend says that a monk from the monastery (X-XII c., documentary XVII-XVIII c.) once saw the shining figure of Saint Maria on the top of a rock. When reaching that spot the monk saw a mark of a footstep on the ground. This vision was considered to be a divine announcement and evidence of the holy purity of this place. Near this spot a new wooden church was built and the “Holy Trinity” monastery founded (1777). Later the wooden church was replaced by a brick one built in an old Moldavian style, decorated with frescos. Meanwhile the community of monks expanded. The monastery can be visited daily.

An exceptional panoramic view of the numerous rocky hills and the forests around the small 16-km river, which runs down 30 cascades and waterfalls, is opened up to the traveler from the cliff-tops. Here there is also an important archaeological site with the remains from the Iron Age (X-VIII c. BC) and a Geto-Dacian headland fortress (IV-III c. BC), which has been preserved in a better condition than any other in Moldova.