Excursion to 9 MONASTERYS of Moldova 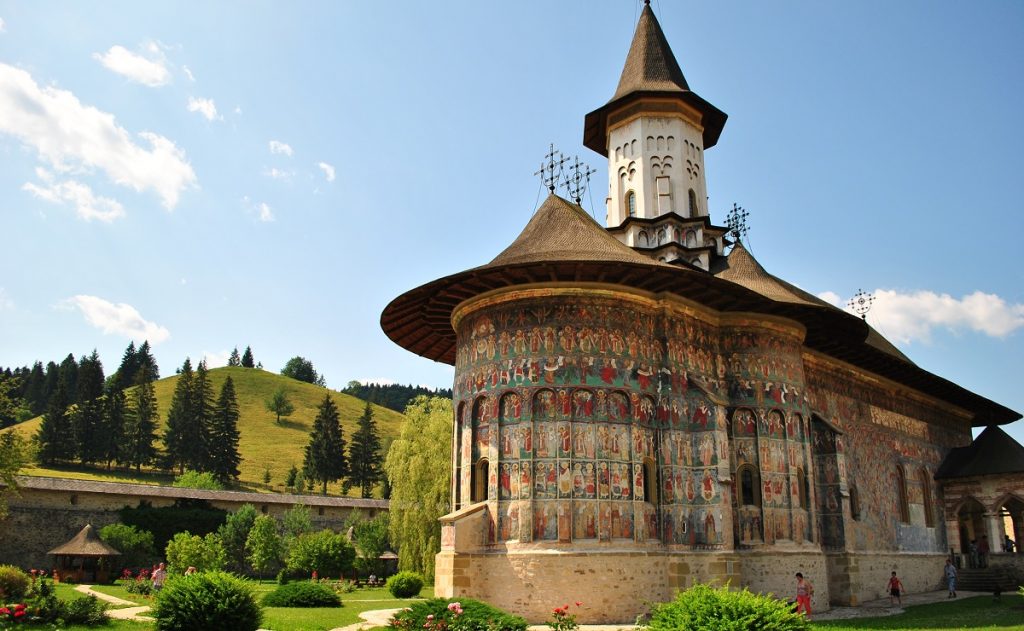 The nun monastery of Frumoasa is dedicated to the Holy Trinity. It is placed in the village of Frumoasa, on the valley of River Ichel, in the raion of Călăraşi. It was founded in 1804 by Efrem Iurcu, yeoman from the village of Onişcani. His name as a monk was Eftimie. At the time the monastery’s name was Frumuşica (a diminutive of Frumoasa, that means Beautiful).

The church was built from wood between 1808 and 1810 by the handicraftsman Ignat from the village of Bravicea. In 1851 the church was rebuilt from stone. It is dedicated to the Dormition of the Virgin. Between 2003 and 2008 the summer church was completely rebuilt.

In 1937 Frumoasa was transformed into a monastery for nuns. In 1946 the nuns left for the monastery of Hirova, because Frumoasa was closed (until 1994). The monastery has another church, dedicated to the Holy Trinity (finished in 1861, the first reactivated after 1989). During the communist times the great church was harshly modified: the belfry and the dome were demolished. Here functioned several institutions: orphanage, school for deaf-mute children, reformatory for minor girls.

In 1994 the monastery was reestablished by monks, and in 2005 was transformed in a nun monastery.

Hirbovat Monastery is located in the Ikel River valley. Founded at 1730 by boyar Constantin Carpuz (or Carbuz), the monastery complex contains two churches: the Assumption Holy Mother of God stone church which was built in 1812 by the layman Stefan Lupu (who later became the monk Serapion), and the Descent of Holy Spirit church, built in 1870 while Ierohim and Natanail were Priors. The monastery is also known for being home to a miracle-working icon of the Virgin Mary. It was given as a gift to the monastery in 1790 by the wife of Russian Colonel Nicolai Albaduev, who was killed by a house at the gate of the monastery. The monastery was closed in 1962, being transformed into a school for children with disabilities. Another church, dedicated to the Pentecost (descent of the Holy Spirit upon Apostles) was transformed by the communists into a club, then, into a stable. The cloistral life was resumed in 1992, later the churches being restored.

The monastery of Răciula is dedicated to the Nativity of Virgin Mary. It was placed in the village of Răciula from the raion of Călăraşi, not so far from the monasteries of Hîrjauca and Hîrbovăţ. It was founded in the 18th century by brothers Andrei and Ioan Roşca, on the estate of yeoman Lupu Stratan.

The larger church is dedicated to the Nativity of Virgin Mary and was built around 1800. This church was rebuilt in stone in 1845 and again in period 1907-1910. This summer church is represented on the foreground of the coin. In 1959 the belfry was demolished, the church’s nave being transformed into a wedding hall (later, storehouse for the local kolkhoz of Răciula).

The smaller winter church was built in 1822, reconstructed in period 1855-1860, and it is dedicated to Saint Nicholas. It is placed on the coin at right, in background.

In July 1959, when the monastery was closed by communists, the nuns attempted to oppose. During the confrontation with militia forces one believer was killed and several others wounded. Later, eight people were sent to jail. At Răciula the nuns lived in houses scattered around the two churches. After the closing of the monastery the majority of nuns stayed at Răciula, being forced to work at kolkhoz (almost all inventory of the monastery being transferred to the kolkhoz).

In 1989-1990 the monastery was reestablished, later the churches being repaired and the original aspect restored.

Accordingly to the legend, it was founded by a monk named Hîrju or Hîrjan, in 1740. Sleeping in the wood, the monk had a dream with the Mother of God (Teotokos, God-bearer), and on that place he built a monastery dedicated to the Ascension of Jesus Christ. Another legend says that the monastery was established by an old man from a local village, named Teodosie, by two monks from Neamţ Monastery and by a Moldavian boyar, Niculiţă. The monastery is located in the Hîrjauca commune, in the raion of Călăraşi, inside the valley of Ichel River.

The monastery has two churches, one dedicated to the Ascension of Jesus Christ (founded by the egumen Spiridon Filipovici in 1836) and one to Saint Spyridon, established in 1848. The firs into the monastery yard, that can be seen in the pictures, and also on the coin and on the 10 lei banknote, were brought in 1920 from Bucovina. The monastery library was enriched with many Romanian religious books in 1918, when Nicodim Munteanu, future patriarch of Romania, was locum tenens of the archbishop of Chişinău and Hotin and worked at the reorganization of the orthodox church in Basarabia.

The monastery was closed for about 30 years, until 1993. In 1959 the old monastery was transformed into “Soviet Moldavia” resort, and the church became dancing club. Nowadays near the monastery is Codru resort, one of the most famous resorts in Moldavia.

The monastery is located in the village of Ulmu, district of Ialoveni and the holy name is St. Teodora de la Sihla. This is a small monastery and different from others- the cupola is blue and not golden as in every other church.

The monastery of Vărzăreşti is dedicated to the Holy Great Martyr Demetrius. It lies in the commune of Vărzăreşti, the raion of Nisporeni.   It is a very old monastery, being attested through a diploma of Alexander the Good in 1420. Until 1815 it was a monk monastery, after that the nuns of the monastery of Cosăuţi took over.

Closed in the 60’s of the last century by Soviet communists, it was reopened in 1992.

In 1678 in a forest at the source of the Cogalnic river the great High steward Mihai Hincu at request of his daughter founded a convent of nuns, which she entered. The convent was named Parascheva. The wooden churches and cells were often destroyed by the Tartar invasions during the XVIIth c., and the “St. Parascheva” monastery remained uninhabited. In 1835 a stone church was built in a Russian-Byzantine style for the summer period. Later, in 1841, came a church for the winter season.

A lot of water springs surround the convent, one of them is mineralized.

One of the oldest monasteries of Moldova, Căpriana is situated in a picturesque forested area once called Codrii Lăpușnei.

The first significant reference dates from a document issued in 1429 that gave Căpriana the status of royal monastery on behalf of Alexander the Good. In this deed the holy abode was referred to as “mănăstirea de la Vâșnovăț unde este egumen Chiprian” (the monastery of Vâșnovăț where the hegumen is Chiprian) and was given in the possession of Alexander’s wife – princess Marena.

After a period of decay, the monastery was rebuilt at the behest of Petru Rareș, from 1542 to 1545.

In 1840 the “St. George” and in 1903 the “St. Nicolae” churches were built. The biggest convent library in Moldova was situated here in Capriana, it was endowed with precious gifts by different leaders. Closed and dilapidated during the post-war period, it was only reopened again in 1989, becoming a symbol of national revival.

Near the monastery there is the oldest nature reserve in Moldova, “Codrii”.

The monastery of Condriţa is placed inside the Codri (Forests) of Moldavia, at about 26 kilometers from Chişinău. It was established in 1783 by monk Iosif, who came from the monastery of Căpriana. According to a local legend, the monastery was founded by a retired haiduc (brigand) named Condrea who wanted to atone his sins. The consecration of the older and smaller, winter church, is to the Saint Hierach Nicholas, who is also the patron of the monastery.

The church of the Dormition (summer church) – was erected between 1895 and 1897, in eclectic style.

In 1918 the hermitage of Condriţa separated from Căpriana due to its increased number of indwellers, thus becoming an independent monastery.

Together with the Soviet invasion, the monastery was forcibly terminated by the new atheist authorities. In 1947 the monks were ousted to the monasteries of Căpriana and Suruceni, that in turn were closed afterwards. Earlier in 1946 the Silviculture School had been established in the monastic complex, lasting over to the 1960. Since 1960 until 1993, the former monastic complex was the seat of the summer camp for pupils. Everything was desecrated, but the churches themselves were not torn down. Fragments of the fresco survived only in the “Dormition” church, that was kept as depot.

Today it is a nun monastery, with only a few souls.

The Monastery of Holy Great-Martyr George is in the village of Suruceni, Ialoveni raion.  It is considered that the Monastery was founded in 1785. Chronicles relate that the land on which the monastery was build was donated by the landlord Casian Suruceanu. Hieromonk Iosif, who came from Montenegro, was supported by a group of Suruceni dwellers to cut the woods on the hill slope and build the wooden church of St. George. On 7th November 1909, the Suruceni skete was attributed the status of monastery. In 1957 the monastery was connected to electricity network, but already on 3rd July 1959 it was closed, its 47 monks, including the hegumen, being sent to other monasteries that were still allowed to exist. Two novices married and entered kolkhoz. St Nicholas church was transformed into hospital, its sanctuary was used as surgery ward.

Since the year 2000 the household of monastery was renovated and expanded, monastic cells, seminary buildings, farm buildings, sewage system were built. In 2004 the monastery’s belfry was refurbished, and in 2005, six bells were installed, including two old ones, preserved from pre-communist times.

During the tour you will need:

-A pen to write

-A few sheets of paper

– Take with you the alimentation

-Ladies must be in a skirt and headed for the visits to religious sites.